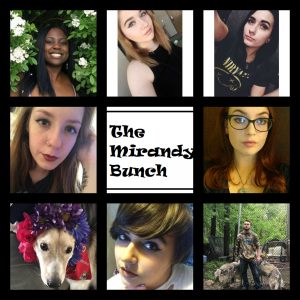 I thought this was a really fun project! I had fun picking out who to place where in the family photo. The bottom left photo of my dog was used because the two people I had chosen to fill the spot as twins did not send me the photos of themselves so I had to improvise, that is my dog Davinci in my pride headband. Going clockwise from Davinci we have: Kylee or Kylizzle, Amanda, Miranda….I mean Marissa (we are roommates and every switches our names up), Ashley or Ash, Brie, Paul (I did not zoom in on his photo because personally I think the photo shows his personality well in the full length), and myself. To make this collage is used befunky.com which is a collage making website and i used mspaint to make the title. Its called the Mirandy bunch rather than Hall because as a middle schooler I was given the nickname Mirandy so I thought it would be a nice touch to the project.