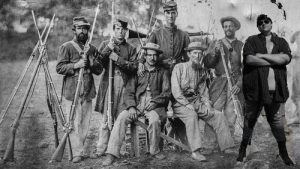 My battalion and I posing for a photo on the battlefield during the Civil War. The Civil War is one of my favorite time periods in American history to study. I love the rich undertones and meaning behind the war, its not just about slavery.

I started this project by selecting the photo of myself, I chose a photo that was taken at a NODAPL protest in Portland because it was such a strong photo that could fit into any battles or protests. I then selected a historical photo from: https://www.nps.gov/civilwar/index.htm.

I actually utilized Lauren’s tech tutorial on Medium to do this project. I used Lunapic to edit the photos and add myself into it. It took me a few tries to get the cut right but after that the remaining steps were really easy to do and Lauren’s tutorial really helped.