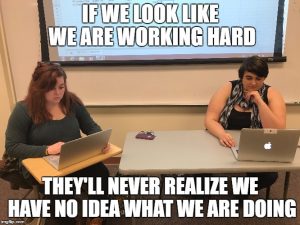 The idea for this meme came to me while scrolling through my phone looking for pictures that I could turn into a meme other than just a selfie. The picture had been taken at my work before the spring semester was over for a promotional video that I was making. We actually were struggling to not laugh while doing these pictures because we had to look like we were working really hard and that we were concentrating on our work. The part about not knowing what we are doing is based on the experience from first semester, we had no idea how to use eportfolio so when students would come to us with questions we would just play around with their eportfolio until we found something that would work for that student. I was a digital literacy consultant and I had to really know my way around a computer and sometimes students would come to us with problems that I had no idea how to fix and I thought turning my experience into a meme would be fun. I used https://imgflip.com/memegenerator to create my meme so it was fairly easy, just input the image and add your text. I had fun creating and playing around with different captions for this meme but I think the one I settled on was the best.